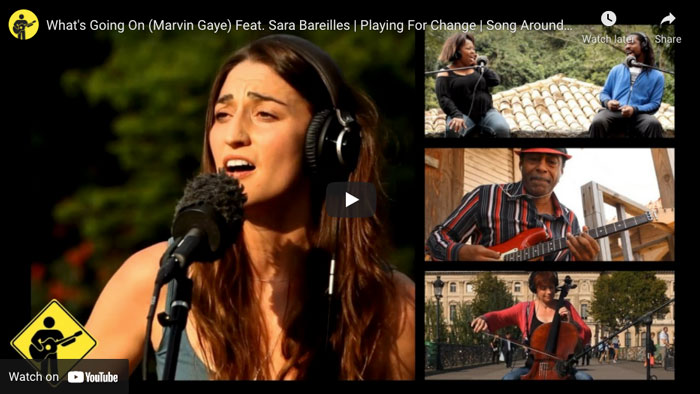 Federico D’Antoni plays the organ on the track “What’s Going On? for the latest 2014 CD PFC3 along with musicians like Sandra Bareilles. Produced by Enzo Buono at his Santa Monica’s Recording Studio.

Playing For Change 3 “Songs Around The World” CD/DVD is now available for purchase at all major retailers in North America! The album includes performances from Keith Richards, Sara Bareilles, Andres Calamaro, Toots Hibbert from Toots & The Maytals, Cesar Rosas and David Hidalgo of Los Lobos, Preservation Hall Jazz Band, Keb Mo, and Taj Mahal in addition to a song produced by Jackson Browne.

Multi-talented music producer Federico Dantoni from InsidePiano Video Tutorials plays the organ in the uplifting song from the new Playing for Change (PFC3) album available at the Amazon, Starbucks, iTunes and PFC online stores.
Grammy-nominated Sandra Bareilles sings on the track, lending her richly toned voice and distinctive singing style. Recorded in Los Angeles, California by Playing for Change Music producer Enzo Buono, the song was destined to become an Internet sensation as well as one of the most played and remembered songs of 2014.
In addition to scoring music for the 49th Chicago International Film Festival trailer (2013) and contributing to another Playing for Change track called “All You Need is Love.” D’Antoni also works at InsidePiano.com, a video tutorials piano and music education website where he helps musicians from all over the world to learn the intricacies of the Music and its relationship with the piano.