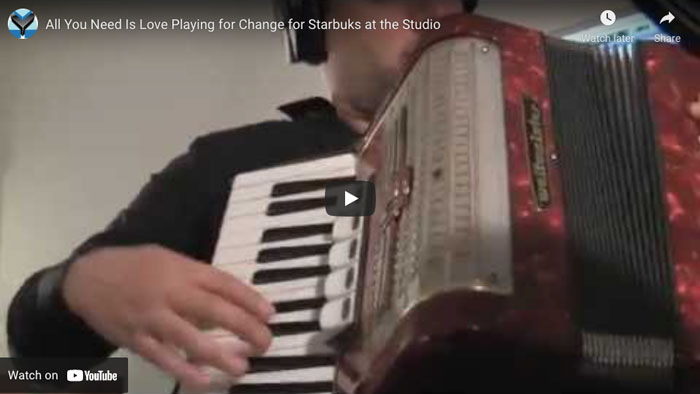 Federico D’Antoni plays the accordion with Playing for Change to help fight Aids in Africa on the Starbucks CD in the song “All you Need is Love.” The album consists of 4 songs by international bands such as U2, John Legend, and Dave Matthews Band.

Since the launching of the Playing for Change partnership with (RED)™ in December 2008, Starbucks has contributed more than $11 million to the Global Fund to help those living with HIV/AIDS. Starbucks continues to support and drive contributions to the Global Fund to help deliver an AIDS Free Generation by 2015, one of the UN’s Millennium Development Goals. To learn more, please visit www.theglobalfund.org

Later, the song took on a New Orleans flair when Mark Johnson brought on board the talent of Jerron “Blind Boy” Paxton, a well-respected multi-instrumentalist and vocalist. Trombone Shorty, from HBO’s Treme, brought his expertise to the horn section. A children’s choir brought energy to the track, a New York female vocalist on the second verse and an Italian guitarist om the solo. The percussion for the song was recorded in Jamaica at Bob Marley’s Tuff Gong Studio, and the track is rounded out with strings and cello, arranged by the former strings arranger of David Bowie.

The result is a beautiful and moving track, which became the album’s title song. In addition to Playing for Change, U2, John Legend, and the Dave Mathews Band participated in the project. It was released in November of 2009, and 1 million copies were sold in that month alone. For every album sold, $1 was donated to help fight AIDS in Africa.

When asked about his contribution to this track, Federico D’Antoni responded, “It was a great honor to have been invited to participate in this production, and is one that I’m proud to have accomplished successfully.”