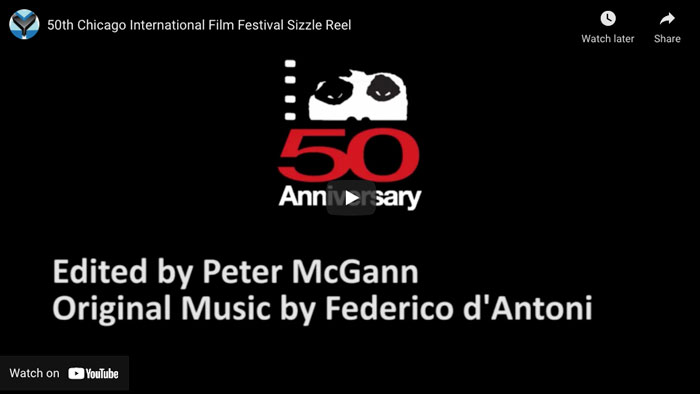 For the second consecutive year, music composer Federico D’Antoni was selected to write the music for the 50th Chicago International Film Festival. He was responsible for the previous year festival’s music as well. InsidePiano Video Tutorials and Federico Dantoni are pleased to donate their time and talents to the arts, as well as to the Chicago community to make the event one that will be remembered by many.

Due to the success of the 49th annual event and the success of this year’s TV and film promo for the festival, it was unanimously decided to approach this year’s score from a different perspective. This year, the music was composed was first, and the trailer was customized to fit the score. The team had ten days to pull it all together with zero available material and a race against time. As anyone in production knows, this is a common occurrence. In the meantime, a decision needed to be made.

Federico and his team made some quick, vital decisions regarding the festival during a productive meeting that took place at the downtown offices of the Chicago International Film Festival. The team involved in the decision-making process included: the president of the festival, Mr. Michael Kutza; video editor, Peter McGann; corporate sponsorship manager, Jesse Charbonier and Federico D’Antoni as the music composer.

Technical difficulties created a setback, but the meeting was successful. There was a choice between club or orchestral musical styles. In the end, the team agreed in a combination of both, a high-energy track along with musical elements to keep the traditional cinematic feel.

Federico used samplers to create the traditional orchestra feel with the high-energy club beat in the background. What initially sounded like a crazy idea turned out to be a beautiful piece of orchestrated music, later edited by Peter McGann and then sent to L.A to be mixed by producer Juan Manzur.

The trailer was a smashing success and received a loud applause on opening night. The video’s commercial and trailer were both showed on a giant LED screen during an opening event at the beautiful Chicago Godfrey Hotel Terrance. All of the festival’s sponsors were present, along with Colin Farrell, to enjoy a beautiful epic night and a lovely view of the city of Chicago on October 9, 2014.